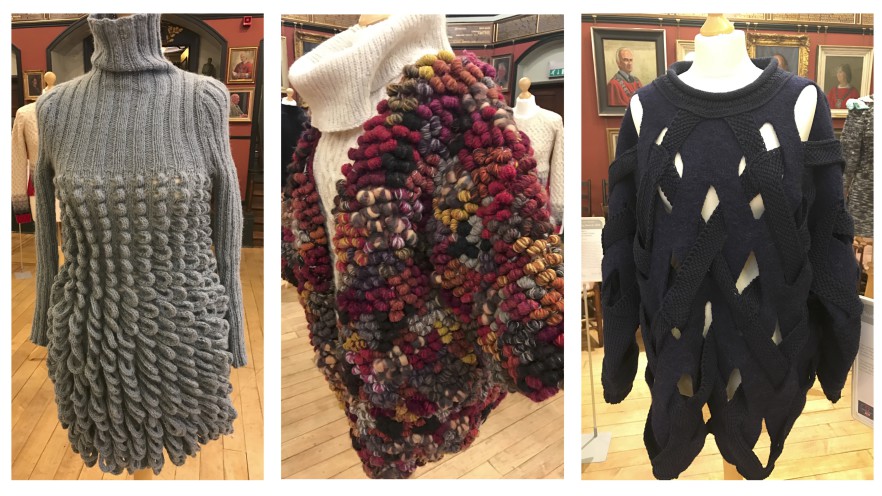 The first Campaign for Wool Hand Knitting Competition aimed at students choosing a design and knit pathway at top UK universities attracted a high standard of work that displayed the design potential of real wool.

Participating schools this year were: Brighton University, Nottingham Trent University, The Royal College of Art and Winchester School of Art who collectively created a radical, conceptual and technically complex body of work.  The entries were displayed at the Artworkers Guild Hall in London during Wool Week for judging and the winners will be shown again in Yorkshire at Wool House, the British Wool Marketing Board’s Head Office during November.

The students responded to a competition Brief created by Marie Wallin, the inspirational British knitwear designer renowned for her intricate Fairisle hand knitting and formerly head Designer at Rowan Yarns.  Students were asked to design a series of fashion garments hand-knitted in 100% wool, or wool-rich, [more than 51% real wool] that displayed sculptural form using cabling and 3D knitting techniques in a palette which celebrated the colours of a British Autumn.

Students were encouraged to incorporate other handcraft techniques such as crochet, macramé, tatting and felting as a means of showcasing the natural versatility of wool as a fibre that can be manipulated by the maker into a myriad of ways.  The Brief asked for an exploration of scale as a means to create drama and complexity.

A rigorous approach to design was required of the students who were asked to create comprehensive sketch books and six illustrated designs which had to be supported by swatches showing their hand-work techniques.  Each student then selected one garment from their shortlist to make up for final assessment.

Sixteen final entries were judged during Wool Week by Marie Wallin, Bridgette Kelly of The Campaign for Wool Ltd, Wendy Barker of Kingston University and Polly Leonard, Founder and Editor of Selvedge Magazine who awarded a special prize to her overall preferred entry.

Marie Wallin in summing up the standard of work this year also talked about what made the winning entries so special “”I was very impressed by the standard of design work submitted truly excelled themselves with designs that not only promoted the craft of handknit and crochet but showed how wool can be a creative and versatile fibre.”

Bridgette Kelly of British Wool and The Campaign for Wool said, “It is an important part of the Campaign’s activity to encourage the next generation of wool designers and makers.  Marie’s Brief was challenging and I was delighted to see the level of creativity and high quality of work – particularly within first-year students –  and  thank them all for the effort and commitment.”

The first prize winner of £500 was Rachel Graham of Brighton University. This very talented designer was only in her first year of her undergraduate Knitwear design course when she submitted work for selection. Her winning design was a beautiful, fitted tunic dominated by a mass of knitted loops creating a dramatic and tactile effect.

The second prize of £300 was awarded to Jessye Boulton from Winchester School of Art, another first-year undergraduate student. Jessye’s design was a wonderful blend of multi-coloured yarns knitted into a collection bullion knots, creating a dramatic and eye-catching, almost carpet-like in its structure and very impressive as a garment.

The third prize of £200 was awarded to Catriona Pringle from the Royal College of Art. This highly creative design was a mix of cut felted wool with twisted knitted strips woven in and out of the felted cut sections.

A special award of a 3-year subscription to Selvedge Magazine was given to Zoe Lyne of Winchester School of Art. Polly Leonard, the editor of Selvedge Magazine was instantly drawn to this dramatic design of a mass of crochet tubes worked into a very imaginative wearable neckpiece or collar.” 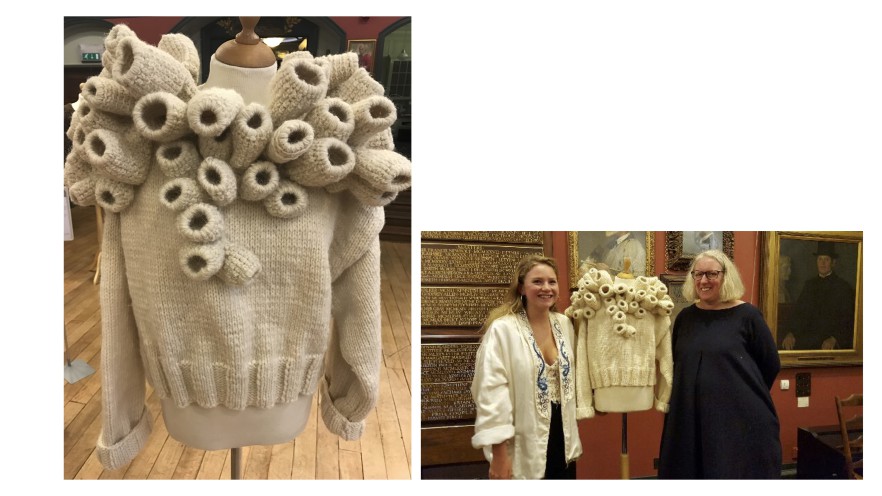 Inspiration for Rachel’s piece came from studying frozen waterfalls and uses an icy blue 100% wool tweed yarn to bring the concept to life.  Rachel wanted to show what the body would look like as a waterfall and created a series of 3d loops which increase as they ‘fall’ down the garment.

Using the colours of Autumn as her starting point Jessye created a highly textured garment using Spring stitch to mimic the natural complexity of the forest floor and to celebrate the quality of the pure wool yarns she used.  Jessye secured yarn sponsorship from Cornish Organic Wool and LoveKnitting.com which enabled her to create a dense and luscious final piece.

Catriona created a garment using multiple techniques that work together to bring pattern and structure to her hand dyed, knitted and felted entry.  The resulting piece was then was embellished with crocheted strips throughout to create a complex woven effect.

Zoe was inspired by the notion of an organic shape engulfing the wearer for her design.  Imagining knitwear as an extension of the body Zoe constructed the garment to obscure the face with a series of sculptural tube-like forms that form the collar.

The garment was hand-knitted in natural undyed British and Merino wool specifically to subtly draw attention to the natural irregularities in the yarn. Constructing the sculptural collar in Dartmoor lambswool, supplied by Lily Warne Wool, was a nod to Zoe’s Devon heritage.

The Campaign for Wool Student Hand Knit Competition is supported by the British Wool Marketing Board and will be developed and expanded upon in 2017.  If you would like your college to take part please contact marketing@britishwool.org