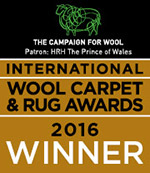 The Awards attracted over one hundred entries as the flooring industry – the biggest user of British and New Zealand wool – competed for Awards in 15 categories.

Judged by a collection of industry experts and editors from leading consumer magazines, the judges explored technical, construction and design excellence and innovation and design. (Judge’s comments attached)

The winners (see link below) were presented with their Award at the Centenary Lounge, Stamford Bridge at a gathering that brought together manufacturers and designers to celebrate the story of wool flooring.

Introducing the Awards event, Nicholas Coleridge, Chairman of the Campaign for Wool, reminded the audience that the Campaign for Wool, which commenced in 2010 was the brainchild of HRH The Prince of Wales who wanted to ensure that wool with its natural sustainable benefits and the future of sheep farming was secure for the future.  He acknowledged that the wool flooring sector was vital for British Wool and New Zealand.

The Awards also recognised the importance of individuals conscientiously working in the industry with its Hall of Fame Award for career long commitment to the wool flooring sector.

John Bain, former Global Design Director was recognised within the commercial carpet sector and Roger and Fay Oates of Roger Oates Design were recognised for their successful career long partnership.  (Notes on the Hall of Fame Winners – link below).  There were also special commendations for the Artisan and small business weavers.

“We felt it was time that our carpet and rug industry and the many people working in it, had a moment of glory for its significant design, quality, manufacturing skills, creative marketing and its loyal passion for wool.  The entry level for these Awards was high, the standard was excellent.  Often flooring is the forgotten story of interiors – but as these entries and winners show – the performance and enduring strengths and story of wool in carpet and rugs is dynamic and has a lot to offer.”  Bridgette Kelly of the Campaign for Wool said.

Wool from sheep breeds in the UK is predominantly used by the wool carpet industry – approximately 65% of about 30 million kilos of British grown wool is used for both commercial and residential flooring. Sheep farmers across the country run flocks that predominantly produce strong wool which is perfect for carpets.  The Campaign for Wool and British Wool Marketing Board are working hand in hand with the industry to encourage retailer and consumer support for wool carpet with its superior benefits in durability – as the best choice for floors.

Available links for downloading are below: